Big Project - A tribute to the old retrogames

I wasn’t quite sure if I was gonna make a blog post about it, but after thinking for a while I thought it could inspire others and maybe it would be beneficial to hear opinions from others.
It’s also inspiring to see when others share their WIP, so why not do something similiar??
But before writing about my Project, a big thank you to the Sketchfab developerteam for making such a wonderful website for sharing artwork, as I spend tons of hours just browsing here almost every day. And thank you to the many talented Artists who are willing to share their are artwork to the world, thank you for the amazing content.

About this Project of mine, I decided to do a continuation of one of my other projects I uploaded several months ago. That one was already such a huge amount of work, but I think I can do bigger than that:# 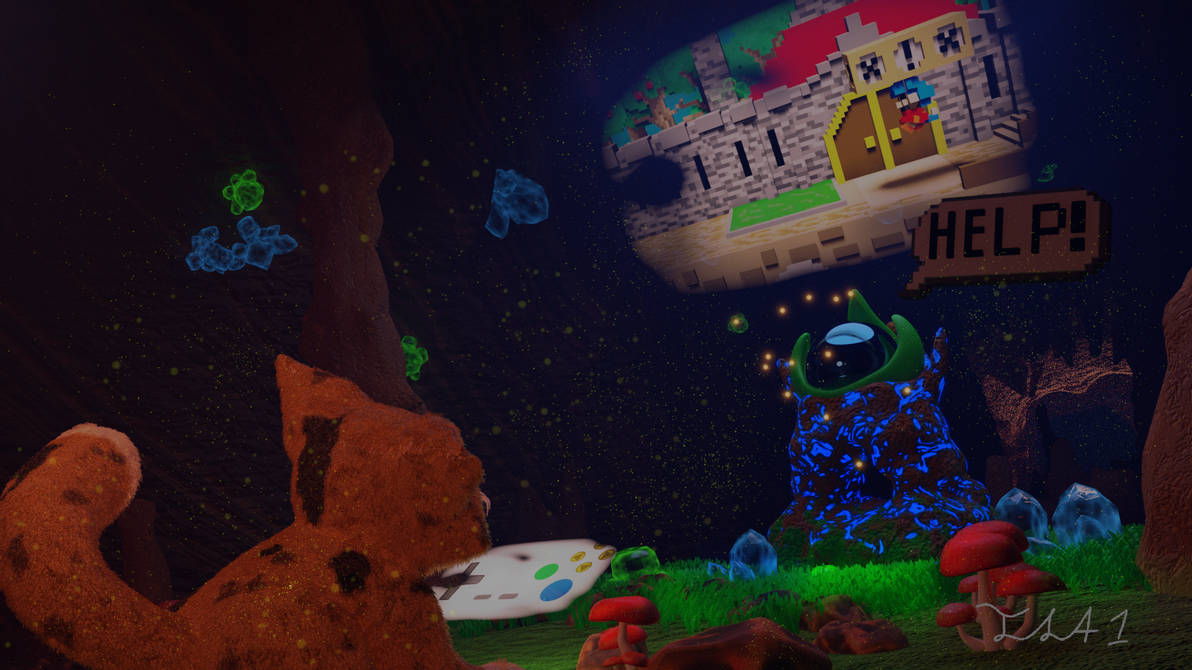 Trapped inside a Game by TheLastAirblender1 on DeviantArt

The new project is based on the same idea, only this time I’ve planned to add so much more stuff to it, making it look like actual gameplay. Some Dialogue, selfmade Soundeffects, animation and other stuff…by myself. Call me crazy if you want

I’ve already spend two to three months of work on it, and I’m far from finished, yet I feel some satisfaction from a project that keeps me busy for a while

I will try to post on a regular basis, maybe once a week or every two. There is a lot to show, so I won’t do it in one go, but for now let’s get startet with it

There isn’t much to say about it, since this is based on an existing idea i already had.
Long story short: My maincharacter Serena got “Isekaied” by pure accident into the gaming world, and the only way to escape is to finish it. But at some point she has to fight some bosses of course, so in this project she is going to fight one of the guardians guarding the relic she needs.
So time was saved quite a bit, since the Idea was already set. As for the boss I decided to make one big-version of the skeleton-enemies, and the area is set inside a vulcanic place.
Anyone who ever played banjo kazooie will see that I took some inspiration from that game, especially the fight with the dragons, and designed the area in similiar fashion

The Concept - building the scene:

I like pixelart, and it’s 3d equivalent is voxelart. Albeit it has a more modern touch, it still captures the feel of good ol retrostyle, like super mario, bubble bobble, zelda, bomberman etc in their early days. And for that, magica voxel is a good choice, thank you ephtracy for your gift. The only thing: It still does a wonderful job at doing terrible exports with terrible meshoutput…
But if you are creative enough, you can get around with, and luckily i didn’t need it to be perfect for animation, so yeah, everythings fine…

One thing: The boss is made of several objects, to avoid the issue of having weird deforms when rigging

Here are some screenshots from Magicavoxel:

Here you see that the boss has a “Helmet” and I wanted him to have facial expressions, which I ditched for now 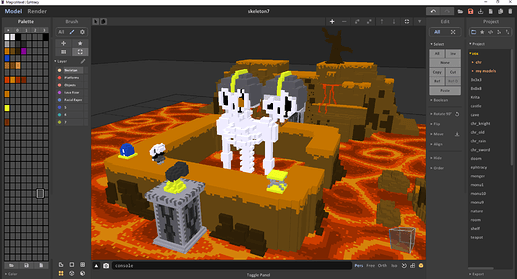 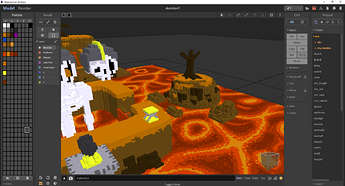 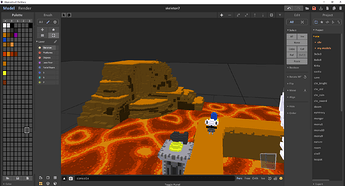 where the artifact will be: 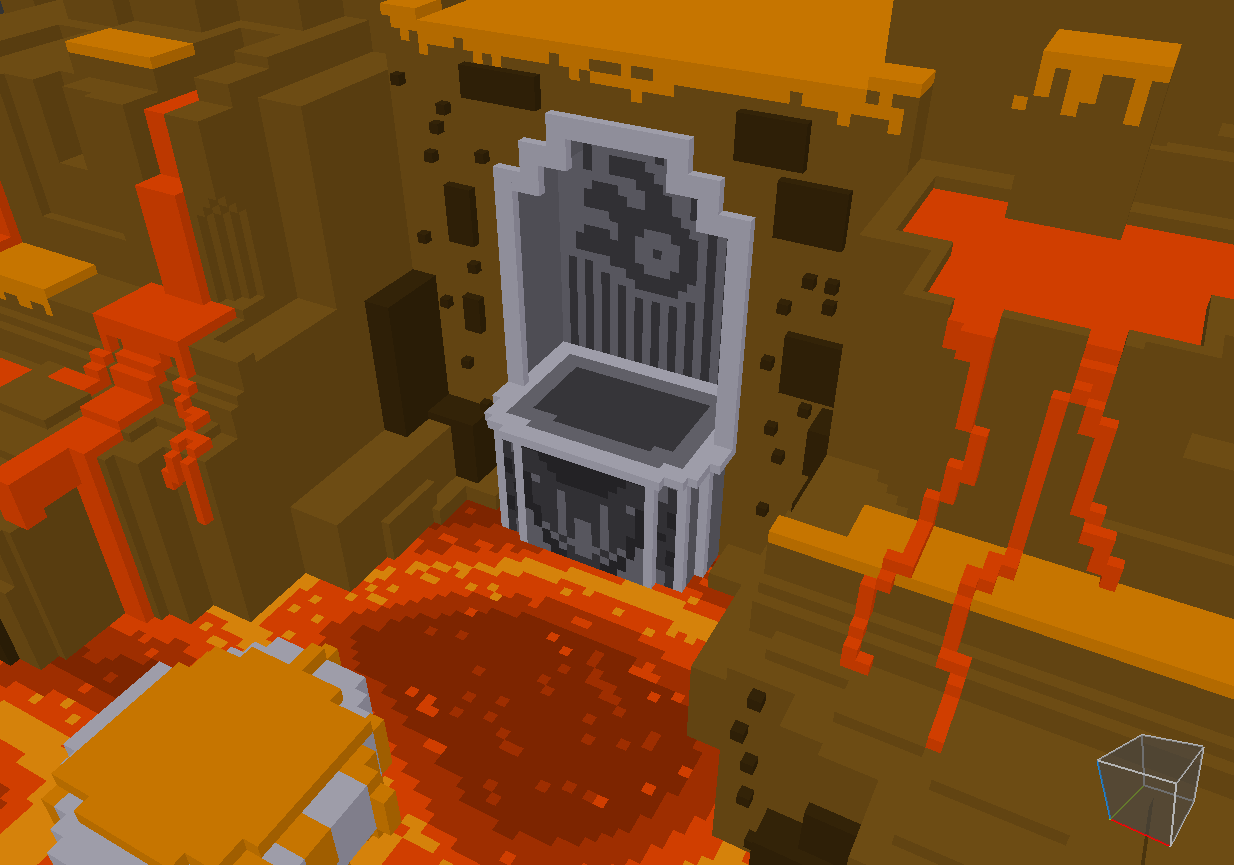 I planned to have him hit the spikes under the bridge, but I noticed that it was going to be too complicated at some point,
so I ditched that as well. The Platform has already been changed a bit 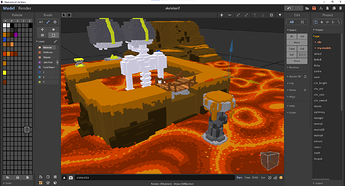 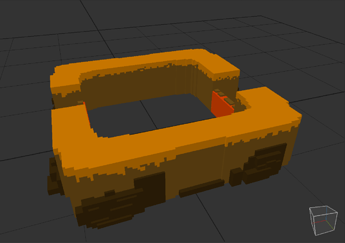 The scene still needs some refinement, but I felt that it was time to export it to blender and tinker with some lighting setup and I also wanted some testanimations get done to find out, like how does the boss attack even, how to damage etc, but I’ll shave that story for later.

The lavatexture was made in krita, then ported to magicavoxel, but when I decided to have it animated i stuck to a simple plane instead

Feel free to use this tileable one

This concludes part 1, there is more in part 2…
Thank you for reading and thank you for beeing a great community

I love this - this is a great tribute, and a nice write up of your thought process going through. Thanks for sharing!

I really love that lava texture too

It is great and fun! Thanks!
I agree, exporting from magicalvoxel is a mess. How did you manage this part?
Fred