Hi. My name is Nik and I am fairly new to the photogrammetry and 3D in general.

I want to share my experience and excitement from the latest 3D scanning challenge.

This year I am spending a lot of time at my parent’s country house.
I’ve always dreamt of making photos of my grandfather’s sailor figurines collection. Still, the whole idea of photos or even 360 photos was not as exciting to me. I’ve heard of photogrammetry and decided to give it a try.

I’ve got a used Canon 2000d and started to scan. Now I have more than 60 models scanned already: Sailor figurines - A 3D model collection by Nik (@nikska) - Sketchfab

I did not know about photogrammetry challenges but wondered why all those people upload bread and sneakers. I’ve recently discovered Forums here and was excited by the idea of scanning a piece of clothes. This sounded like a proper challenge, and I was a bit bored with scanning figurines already.

As I try to spend more time with the family, the projects I do are now more family-focused. I’ve asked my mother whether there are any valuable clothes items in the house, and out of a couple of weird or huge ones I chose the dress she used to wear when she was 1-2 years old.

Here’s the setup I ended up using:

First, I made a stand out of a wood plank and a rod, which I then connected a mannequin base made of styrofoam: 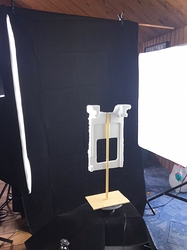 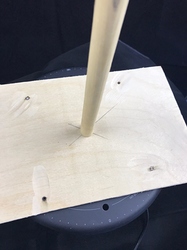 Syrp’s table has some handy holes drilled in it that I used to secure the base of the stand with screws to.

I also had some pieces of black fabric secured to a couple of photography stands and a wooden rod with clamps. Just like a real studio!
Mine is set up in the attic, so don’t mind all the mess. 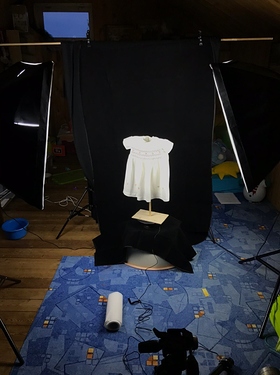 Oh yeah, and the mannequin is actually made mostly of paper towels held up by the paper tape.

I’ve also got a used studio tripod recently, which allowed me to do the shots from all the possible angles. 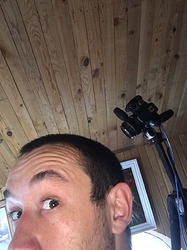 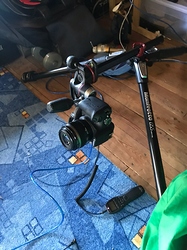 The real challenge started with the first shots. Syrp can do 100 shots per full rotation, but those are good for solid objects. Every turn is a major jerk for the lightweight dress fabric. I could not figure out how to smooth the action, so I switched it to the Video mode. 10 minutes per full repetition turned out to be a perfect speed. I set up the timelapse controller to do one shot every 6 seconds effectively, resulting in 100 shots per full rotation.

I usually scan with ISO 200, which is the least noisy option for the cheap 2000d. To shoot the moving object, I turned it all the way up to 800. The result was noisier, and it affected the details in the shadows.

I made a couple of not as successful attempts, which were affected by the slightest wind. I had to close every door and window to stop the air movement in the attic and spend a full hour in the quite hot room now—Per attempt.

Which was not as bad, to be honest, at least I had Wi-Fi.

The second major challenge was posed by the model itself. Some parts just did not align, and Metashape could not catch enough tie points in the middle of the dress.

I’ve analyzed the photos and found out that they lack details there. The last shoot was done with a couple of close-ups and only in RAW format. This allowed me to color-correct the whole batch later using Datacolor’s Spyder24 color checker and get more details from the darks.

Using Reduce Overlap was fast but I was losing the details in the fabric folds.
Eventually, I’ve enabled all cameras and got more or less clean Dense Cloud and the model at the cost of more processing time.

I had nowhere to rush, though. 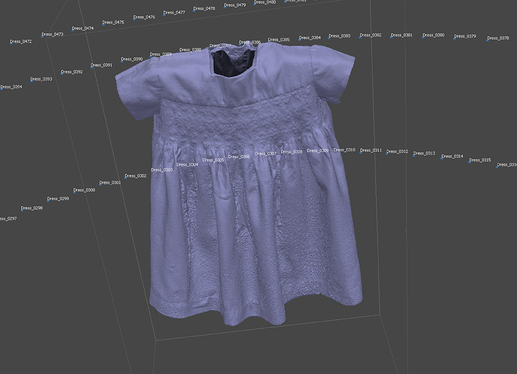 Since the challenge is focused on the Agisoft Metashape, I decided not to do much outside work. Well, not that I could do it in the first place. All the sculpting software is alien to me, and I had only the weekend to finish the challenge. After a couple of hours of 3D Coat tutorials and trying to get used to its UI, I finally gave up to turn my attention to the shooting and processing techniques.

I made another attempt with the Mesh created from Depth Maps, and the result was truly impressive. There were some details lost, but after decimating in Instant Meshes (which I find to be a good intermediate tool for decimating), only a handful of weird polygons created in the creases to clean. 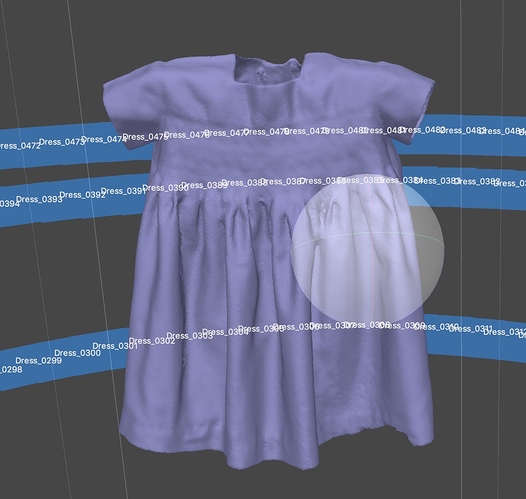 Just a bit of smoothing, and the model looks good. At least, solid.

I am still amazed by the magic of photogrammetry and the power of Metashape. The level of detail in the rendered texture is astonishing, again, with the camera I had for less than 200 bucks.

The new experience is also quite refreshing in the current self-isolation times. Now to think of it, this is the main driver for me to keep scanning and keep learning.

My mother loved the render even though I am not completely satisfied. Not sure if it’s allowed to edit the submission after it’s uploaded. If it is, I will do just a tad of extra Blender work to smooth out the fabrics.

Thank you for your attention,
Nik

Thanks for the awesome run down of your workflow!