Thanks for looking into this. Using the chrome://gpu link you provided, I have pasted the report below.

@danderson4 I think that if you reply by email, attachments aren’t posted on the forum. Could you email the report to community@sketchfab.com please?

Bug filled on chrome reports, they try to reproduce and investigate

Wanted to provide a quick update. I have looked over the log on the chromium.org ticket and based on the information in Comment 10 I did the following:

After these attempts the SF interface still unresponsive for 10+seconds before model starts to load. Rechecked Edge and Firefox and responsiveness and model loading is nearly instantaneous.

As stated earlier, this machine has not had the problem until about a week before my original post date.

There is also a 12 second delay of unresponsiveness when attempting to change 3D Settings on a model. This delay includes none of the settings options on the left to load until after the delay.

Thank you again for all the help and your continued efforts to solve the issue.

Hello again,
I have done some more “investigating” and in trying different scenarios have found the following:

So, it appears to work as expected only if I first go to Sketchfab.com on a tab and leave that tab open and THEN “use” a sketchfab model embedded on a webpage and then use a link from that model to open a new tab in sketchfab.com. Then the new tab, the original tab, and any new tabs I open of sketchfab.com perform as expected without the lag or unresponsiveness. This works as long as I keep the instance of chrome open. As soon as I close Chrome and then start a new instance, this doesn’t not work and unresponsive is happening again. I can also report that if I do scenario 1 in one instance of Chrome and then open another and another and another instance, all the instances of chrome perform as expected without a delayed response in the sketchfab.com interface. If I close them all and start again the problem starts again.

Thanks for the very detailed report, will forward to google team!

I am also having this issue, win10, chrome. Model loads endlessly, then “Page Unresponsive” dialog from Chrome. Sketchfab worked just fine on this very beefy PC until a week or two ago. Works fine in Firefox, as well as Chrome on other computers.

I attempted but was not able to replicate your fix, @danderson4. I’ll try it again.

From the thread, it sounds like the problem is on the Chrome side?

Unfortunately, I still have not been able to get a fix. The information that I relayed was only an observation of some of the strange ways that Sketchfab was performing. It has to be a problem on the Chrome side but I don’t know what it is and have not gotten any answers from the thread that Sketchfab started with Chrome support. It is very frustrating as I typically use Chrome as my browser, but then have to reopen everything in Firefox to get it to load efficiently.

Yes this happends me too.

Is this happening on a specific model, or everywhere? Please provide as much detailed information as possible to help us investigate.

I’m having kind of the same issue, if I try to load the sketchfab main page or a model page, the site freezes and the model doesn’t load, it’s stuck on the loading screen. But if I go to any website that has an embed viewer, I can click on the viewer and the model loads and I can interact with it, if I click to open the model on a new tab, the problem happens again. I tried to access a model using chrome or Microsoft edge and in both browsers, that happens. I tried activating the hardware acceleration and the chrome:flag ignore blacklisted and it still doesn’t work on the sketchfab domain, only the embed viewers work. Also, that happens with any model. I tried to reproduce the steps that danderson4 said could solve it temporarily (opening the main website and then opening an embed viewer and it turns responsive) but it didn’t work

d activating the hardware acceleration and the chrome:flag ignore blacklisted and it still doesn’t work on the sketchfab domain, only the embed viewers work. Also, that happens with any model. I tried to reproduce the steps that danderson4 said could solve it temporarily (opening the main website and then opening an embed viewer and it turns responsive) but it didn’t work

I’m also having this problem. I’m not able to view any models directyl on sketchfab. Embeded models such as the link danderson4 shared appear to work, but thats all. Strangely this issue is in both chrome and edge.

Hi, as we don’t reproduce, it would help if you could provide more details:
Could you post a screenshot of a https://webglreport.com
Thanks ?

Sure, do you need the supported extensions bit as well. 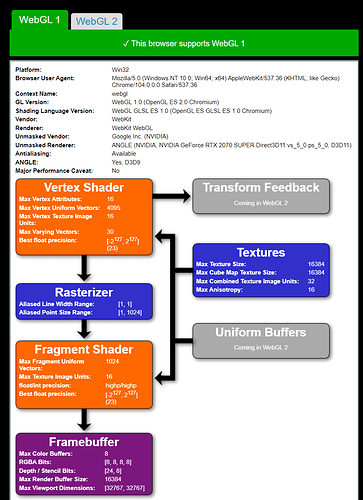 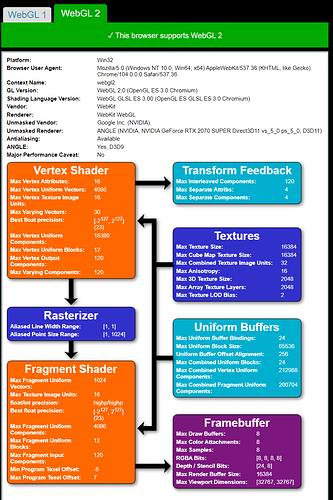 Thanks very nice, it helps (no need of extensions)

Sorry to bother can you try to reproduce the bug in “incognito mode” of the browser ?

Hi Paul, it’s strange, but the bug isn’t happening anymore, maybe it was solved because of the last chrome update? If it happens again, I’m gonna record a video of it and send the screenshot.

1 Like
Site crashes while trying to load Model
← previous page