Still chipping away at the textures. I also fixed a couple of scaling issues after testing the scene in VR today. The seats were too small and the handle rings were massive. XD

I should probably do a lighting pass soon. Kind of using a default lighting setup at the moment. 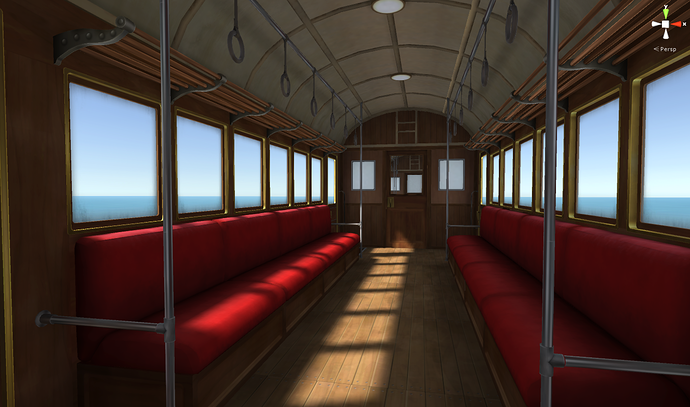 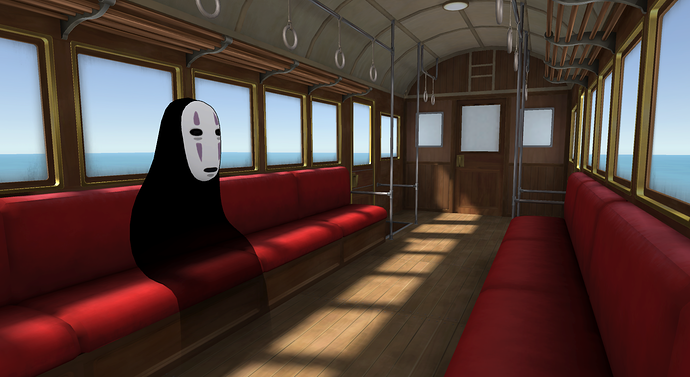 Just checking out my model in the sketchfab viewer. Still a lot of work to do and no lightmaps in this version. I’m hoping to get a huge chunk of the project done at the weekend. I merged some elements together and combined their textures which should make things a bit easier.

I started testing my lightmap workflow. I have a couple rendering issues which I need to fix but It’s starting to come together. I just need to model the luggage and finish the exterior, then I can start animating and polishing. The handles are missing from this version btw.

Some quick parcels. Will detail them tomorrow. ^^ 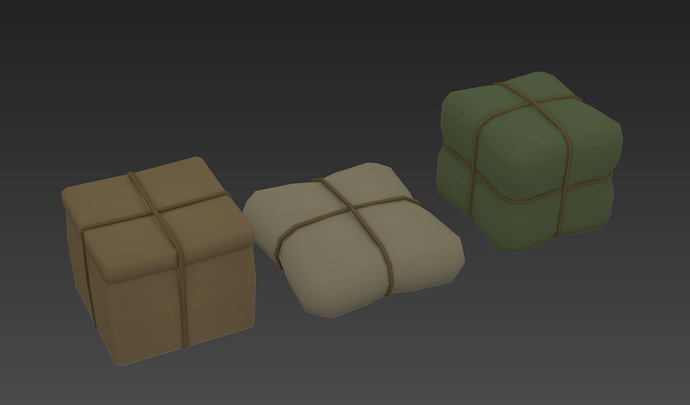 I love this scene! -

I’m still experimenting with lightmaps. I’m finding that even at 100% white, the lightmaps aren’t illuminating the scene much. For example, the light that is being case through the windows onto the floor is 100% but it doesn’t really seem to be that bright. It would be bad practice to compensate by boosting my texture levels and darkening the shadows in the lightmap but perhaps that’s what I’ll have to do.

I’m also struggling with the non-VR viewer. Is there any way to set the default view to first person instead of orbit?

The clipping plane is also causing issues. I’m hoping that scaling the scene up will fix this. Unless its to my sky dome being so big. Although I wouldn’t want to scale it down as it will look unrealistic in VR. Perhaps I can bake an environment map instead.

I’m happy with how the parcels turned out but I’m losing a lot of detail in mobile viewing mode due to the compression. It’s going to be difficult for me to change this in the atlas so I might bring them in as a separate material.

Other than that, I’m quite happy with the progress so far. I haven’t got a huge amount of time to spare this week so I’ll be bringing the scene to a presentable state and then using the remaining time to polish. 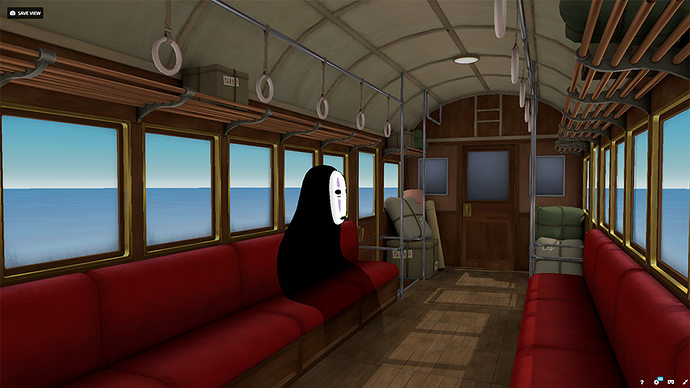 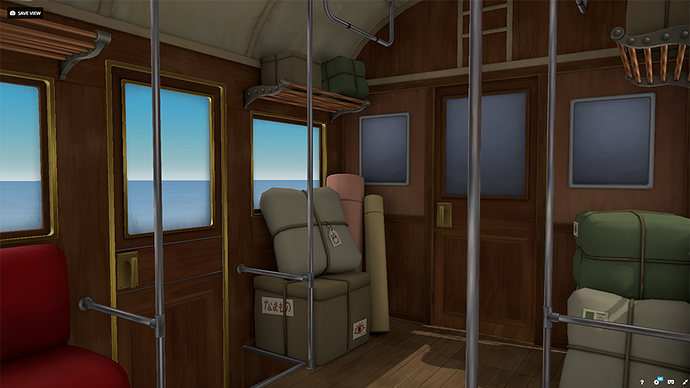 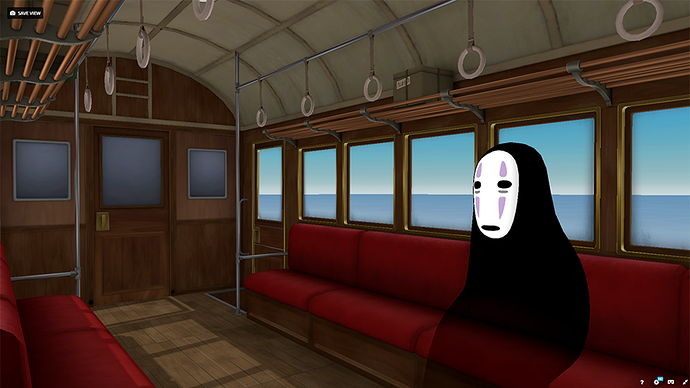 This is really starting to come together!

I’m curios about exactly the same questions as you. My scene has a nebula-sphere thing which forces a ginormous scale - the centerpiece is getting lost in the sheer size of it all and clipping issues abound. And that’s before even dealing with the fact that in VR I need to keep the “plane” extremely low/far (because space is a 360 degree thing) but that renders the scale even more minuscule, per Sketchfab’s automation.

It’s an awesome platform but VR environments are not quite there yet, I think. Please let me know if you work out any solutions to your problem - I’ll do the same!

Thanks man. Your scene is looking great too! I’m going to try use the HDR environment feature instead of a sky dome. Hopefully that will be a good work-around but I’ll have to make the sea smaller too.

This is looking lovely! Such nice textures.
Keep up the awesome work!

Really looking forward to your entry. It already is stellar quality.

That’s definitely one way to work around it - but damnit, I was so happy about the parallax effect between the nebula and the stars. Might be worth the tradeoff though.

One of my favorites so far! great film:)

Anims done and some lightmap issues fixed. Still a fair bit of work to do but getting there. : )

Here’s my final piece and a bit of info about my process.

I felt this scene would work great in VR because it’s nicely contained within the train but it also has great view of the sea and clouds through the windows. I also thought the hanging handles, railings and shelves would provide a nice level of depth in VR.

I originally planned to have more things passing by in the exterior, however I didn’t want any obvious repetition or seams in the animation loop as it would make the experience less immersive. I wanted a nice clean loop so you can really sit in the scene for a few minutes and feel like you’re actually there. I felt the sunken crossing was the ideal candidate for adding some movement to the scene without it being too repetitive. I hope that people who have seen the movie will remember the sound of the crossing whizzing past when they see it.

I also planned on being able to see into the next kart but later decided not to (Even though a copy and paste would have done the trick) I wanted to keep the poly count down just to avoid performance issues.

You might not have noticed but I did add some decals in my previous upload. This includes footprints on the floor and some damp drip marks on the walls. They are subtle touch but if you want a closer look at where I put them, you can turn wireframe on and you should be able to see where they are.

I would have loved to get a full view of the posters in the train but I couldn’t find any images. You don’t get a full shot of them in the film but I know they are featured somewhere in the Ghibli Museum in Tokyo. I was going to leave them blank (like in my WIPs) but instead I decided to use some Miyazaki concept Sketches. You can’t really see them clearly but It was just to add a bit of texture more than anything.

All modelling was done in 3DS Max and textures were done in photoshop. Lightmaps were baked in 3DS Max. I did a couple of separate lighting passes and balanced them in photoshop. I also used Unity as a quick means of experimenting with lightmaps and viewing in real-time.

I think this is one of the most important (and most beautiful) scenes in the movie. It was definitely a challenge to do it justice but I’m very pleased with my final piece

Hope you enjoy it too!

Despite of i dont like this cartoon movie (it scares

This is fabulous. Really amazing. The only potential thing I could say negative about it is that the loop seems a little fast. That’s it. Everything else is fabulous. You have totally blown me away, and I really hope you win this competition.

I think your scene looks really nice, with or without vr

really nice attention to detail and quite a lovely artstyle.