Trapped inside the Game

Decided to upload a small animation. This is part of a bigger project of mine, and the final Result can be seen on my Deviantart profile: 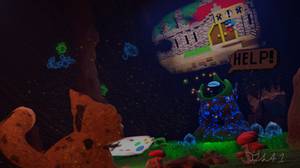 Trapped inside a Game by TheLastAirblender1 on DeviantArt

And here is the animated result on Sketchfab:

Trapped inside the Game( DO NOT MOVE CAMERA!!) by TheLastAirblender on Sketchfab

The Gamepart was entirely modeled in Magicavoxel, then ported to blender for the Animation.
I played a lot of Super Mario as a kid, and I thought that this was the easiest to translate and animate in 3d. I also like the pixelartstyle, for which magicavoxel works great.Background and concept was done in Krita.

I had this idea a looooonnnggg time ago, but it needed to be fleshed out and I had this kind of artist block where I just couldn’t think of how to make the scene, where does it take place?
A lot of Inspiration came from this artist David Revoy, who made a fairly known webcomic called Pepper and carrot, which I absolutely love, if anyone is interested

. After a lot of research, I felt that a cave would be ideal.

Rendering the whole thing as animation was taking too long, which is why the final result is a still
picture. For correct display on sketchfab, I had to do some tweaks. Camera animation is impossible to do, so I had to resort to a method someone posted in the forum a few years ago:
If you cant move the camera, you have to move the world

. Which works great on a close up without breaking the illusion. It was quite tricky, but thankfully blender has a few tricks to make this somewhat easier.Example: to move the ground, i just had to copy the characters y and z axis movement in reverse using a contraint, then bake the whole thing.Afterwards I deleted the characters keyframes for y and z-axis movement and thats it. The hat was tricky on the other hand because of parenting issues that needed to be resolved.

The whole project took me about 1-2 months.

Dont be shy to ask questions or post constructive feedbacks